Residents of Grafton gathered Tuesday night for a town-hall style meeting hosted by the Spanish renewable energy company Iberdrola. The company is hoping to build a wind farm in Grafton, and has already developed wind farms in Groton and Lempster. One of the selling points for towns is the potential for tax revenue from the wind farm to offset residents’ property taxes.  This is a quick look at how property taxes in Groton and Lempster have been affected by Iberdrola’s wind farms.

Pam Hamel, the administrative assistant to the Groton Selectboard, says that overall the wind farm is “a very good project for the town of Groton.”  Beginning when the farm goes online at the end of this year, Iberdrola will pay Groton $528,000 annually with a 2.5 percent annual increase in PILOT (Payment In Lieu Of Taxes) payments to the town of Groton. While the county tax burden will likely increase by $100,000 because of the wind farm, Hamel says that cost will be offset by the PILOT payments – leaving Groton with a net gain of more than $428,000 every year.  Even before the PILOT payments have gone into effect, Groton has been able to lower the town’s tax rate by $1.77, with funds from the wind farm’s one-time land use change tax.  And unlike most other towns, education funding for Groton students is not tied to property values, which means that the wind farm won’t increase education costs for the town.

That makes Groton different from the town of Lempster, which is part of a cooperative school district. As such, 50 percent of Lempster’s school funding is based on the town’s property values.  “So as the equalized valuation for Lempster went up, we ended up paying a larger portion in school taxes than we had been,” says Barbara Richards, Lempster’s Deputy Town Clerk. In fact, the town of Lempster’s education taxes increased by $317,722 the year after the wind farm went online – although other economic variables may also have played a part in the increase. That cost, in addition to the $186,137 the town paid in additional county taxes after the wind farm arrived, means that Lempster residents have not experienced the windfall they may have hoped for. Richards says that while the town’s tax rates decreased for one year after the wind farm opened at the end of 2008, they rose above pre-wind mill rates the following year – when the town’s new property valuation kicked in.

In Groton, town officials are still deciding what to do with the PILOT payments they’ll be receiving from the wind farm — which almost double the town’s operating budget.  Pam Hamel says they are discussing road improvements; lowering the tax rate even more than they already have; and putting money into capital reserve funds.  She says the wind farm’s positive economic impact is enough to create population growth in the town of fewer than 600. In anticipation, Groton’s Selectboard is holding a community meeting to discuss land use restrictions as a protection against uncontrolled growth. That meeting will be held Wednesday night.

If Iberdrola and the town of Grafton decide to move forward with a wind farm, residents and officials there will most certainly be looking to lessons learned by those in Lempster and Groton. 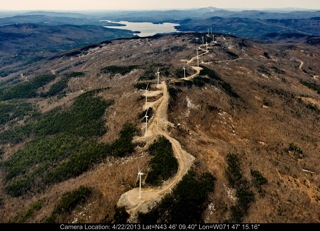